The Columbia Gorge Region's Bridges to Health Pathways program was spotlighted on October 24th in Ruralite Magazine. Bridges to Health is a pathways model that employs Community Care Coordinators (CCCs) throughout the region to support housing-challenged individuals and connect them to available services. Check out the full text below, or click here to go to Ruralite.

Amanda was three months pregnant when she hitchhiked from her home in Washington to The Dalles, Oregon to escape the father of her child.

A violent man, he choked her nearly to death once. Slipping into unconsciousness, she survived only because police arrived in time to revive her.

He choked her again after she got pregnant, leaving visible bruises on her neck and body. That’s when she knew it was time to leave.

“I did it because, ‘What if he killed me? What’s going to happen to the baby?’” says Amanda, a member of the Yakama Nation.

After calling police to report the attack, Amanda fled with nothing but the clothes on her back to The Dalles, where she slept on the streets for two months before moving into a trailer at a Native American fishing settlement without electricity and clean water.

Today, Amanda rents a 2-bedroom apartment, is studying for her GED and hopes to buy a house one day, thanks to help from an innovative program that is changing the face of health care in the Columbia River Gorge.

CCCs serve vulnerable populations by reducing barriers to health and wellness. Clients guide the process, describing their most pressing needs to CCCs, who connect clients with services and follow up to ensure needs are met. The program serves nearly 300 housing-challenged individuals in the Columbia River Gorge.

Bound by the snow-capped peak of Mt. Hood and the mighty Columbia River, The Dalles is known for its majestic old-growth forests, temperate climate and abundant recreation.

Before award-winning wineries and farm-to-table restaurants dotted the landscape, the Yakama, Nez Perce, Warm Springs, and Umatilla tribes flourished in the Columbia River Basin for thousands of years, converging on The Dalles area to fish, trade and socialize. At the center of their culture, religion, diet and economy was salmon—the symbol and lifeblood of the Pacific Northwest peoples. Starting in 1933, the federal government built a series of dams on the Columbia River that flooded Native fishing settlements and devastated salmon populations.

Instead of permanent housing and modern infrastructure, the government provided fishing settlements like Lone Pine, where Amanda and her newborn son lived in an unheated trailer.

One of the most dilapidated settlements, Lone Pine is home to dozens of families who share a single restroom with four shower stalls, four toilets and inadequate sanitation.

“All these people living out there are considered homeless because they don’t have any utilities,” says Blanca Flores, a CCC at Mid-Columbia Medical Center who works with patients enrolled in the Bridges to Health Pathways program.

While the majority of the people enrolled in the program are Caucasian, about one third are Native American.

Born and raised in Hood River, Flores was working in the marketing department of a loan company when the 2008 financial crisis hit.

In the wake of the sub-prime mortgage meltdown, her employer opened a department that specialized in loan modifications for people at risk of losing their homes. For five years, Flores helped people save their homes and found she enjoyed providing hands-on assistance.

The foundation works with and provides financial support to MCMC, including the breast health program, which educates low-income women about the importance of mammograms and supplies them with vouchers for free mammograms and transportation assistance. In the past three years, it has provided more than 270 screening mammograms, which resulted in five breast cancer diagnoses.

“In navigating that program, I stumbled upon people who needed more than breast health education,” Flores says. “Patients didn’t want to stop at the mammogram. They were trying to get their health in line, and a lot of other barriers were coming up.”

When the Bridges to Health Pathways Program started, Flores jumped at the chance to continue providing direct assistance to vulnerable populations.

“I’ve been a true believer of the program since the get go because it works,” she says. “I’ve seen patients like Amanda come here with nothing, and now she has so much going on. We broke the cycle of abuse with her.”

At MCMC, patients are screened for the program at either the emergency room or one of the outpatient clinics. When emergency room personnel encounter homeless patients, they contact hospital CCCs, who follow up with every patient.

It’s a big change. Hospital employees used to provide homeless patients a list of services and hope they followed through.

Flores and other CCCs support patients by taking an active role in their lives, meeting clients in the community at local parks, shelters or anywhere that serves their needs. Flores says taking a proactive role in the patients’ lives is a much more successful approach.

Amanda was referred to Bridges after her 3-month-old son was hospitalized for pneumonia at MCMC. She missed a follow-up appointment with her son’s pediatrician, so Flores knocked on the door of Amanda’s trailer and asked how she could help. 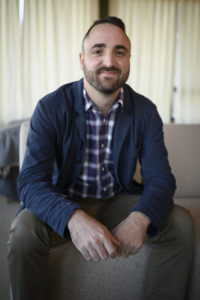 Health care providers have always known their most vulnerable patients experience barriers to health and wellness, including substandard housing, inadequate transportation and limited access to food, but their job is to deal with the immediate health need.

Thanks to Bridges, now providers can address the root cause of inadequate health care and missed appointments by referring patients to the hospital’s CCCs.

“It’s peace of mind for the patient and the provider,” says Jon Soffer, an adult nurse practitioner at MCMC Internal Medicine.

Raised in the New Jersey countryside, Soffer says he always knew he wanted to practice rural medicine. His interest was confirmed at Emory University in Atlanta, where he provided health care to migrant farm workers while completing his master’s degree in nursing.

“Wellness is future-oriented,” Soffer says. “It’s unrealistic to expect a patient to prioritize a doctor’s appointment three months from now when they don’t know where their next meal is coming from.”

Many of Soffer’s patients are housing insecure, stringing together nights in shelters and friends’ houses. Others, like Amanda, have somewhere to live but lack running water, electricity, heat or sanitation. CCCs screen for such issues and work to address the barriers to better health and wellness.

“Sometimes there’s one specific thing that if it’s purchased or addressed, it can make an enormous difference,” Soffer says. “When those needs are taken care of, it provides a secure base to work from. Now you can solve their health problems rather than every appointment being, ‘Where are you going after this appointment? When was the last time you showered? When was the last time you ate?’”

Many of Flores’ patients are fighting a vicious cycle of addiction or mental health issues, poverty and homelessness. For them, personalized assistance—someone to follow-up, provide guidance, and positive reinforcement—is invaluable.

Amanda was a little leery at first, but she accepted the help.

The first thing she did was get a restraining order against her baby’s father. Now she is taking GED classes, processing her trauma with a local shelter for survivors of domestic violence and volunteering with a local nonprofit.

All housing-challenged individuals and families in Hood River and Wasco counties are eligible for the Bridges to Health Pathways Program. For more information or to refer directly to the program, call the Columbia Gorge Health Council at 541-705-2705.

The Road to Becoming a Community Health Worker: Spotlight on Maria Peña

Addressing Housing Challenges in The Gorge: Spotlight on Karen Long

Born to Be an Activist: Spotlight on Janet Hamada